Best of inscriptions found in Karnataka are Memorial Stones. They are very unique to Karnataka and the varieties in them are stupendous. And are found nowhere else in whole of India with such abundance. Some of them are also found outside the state, in territories which were part of dynasties of Karnataka. Here are some of the very unique and best memorial stones found in the state.

Kappe Arabhatta was a Chalukya fighter, of the 8th century who is known from a Kannada verse inscription, dated to c. 700 CE, and carved on a cliff overlooking the northeast end of the artificial lake in Badami. The inscription consists of five stanzas written out in ten lines in Kannada script. It consists of a Sanskrit shloka. Of the remaining stanzas, all except the first are in the tripadi, a Kannada verse metre. This shoka mentions mind of the heroes who fought in the war. 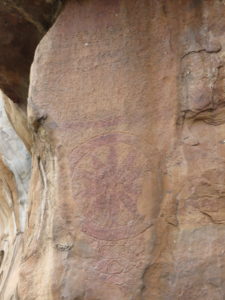 Another 10th Century memorial stone inscription has the following shloka:

Meaning:  When a warrior wins in war, he gets wealth. But if he dies in the battle field, he gets association of heavenly women. The body would decompose in seconds and there is no reason to go back to take the dead from the battle field.

Another shloka mentions about the courage and heroism of a warrior. As per mythology, only two persons can attain to reach the corona of the Sun. a Yogi, another is the warrior who sacrificed his life fighting in the battle field. This is how heroism was cherished and glorified through inscriptions. Because of these, warrior Emperors like Chalukayan Pulikeshin -II had titles such as ‘King of Three Maharashtras’.

Rashtrakuta King Krishna – III staged an expedition and took his forces up to river Ganga. Evidence to this expedition can be found in Jura, a small village in Satna district, Madhya Pradesh. The inscription here mentions that, Krishna–III, during his campaign, treated women with most respect like he would treat his mother and sister and never indulged with any women. Inscription also mentions that he was adorned with the title ‘Paranari Sahodara’  (Meaning brother to all women). Rashtrakuta queens actively participated in wars and even gave birth on the battle ground. To sight one such example, Rashatrakuta Nrupatunga Amogavarsha was born on a river bank in a battle field.
Later, in 10th century A.D., Chalukya Vikramaditya VI, who waged a war against Malvas, stationed his army on the banks of river Narmada,  and in this camp, his wives also stayed with him. Most of the rules of war changed with the advent of Muslims to Deccan (13th Century A.D onwards).  Women stopped participating or joining their husband in war in the later era.

Begur hero stone is a unique 10 century A.D, inscription which elucidates the techniques and strategies in a battle and gives details about sword fighting, spears throwing techniques. This is the best hero stone available in whole of India and is now preserved in Bangalore Museum.

Begur hero stone is has two portions, the lower portion depicts actual war scenes in detail. In this portion, the hero warrior of this stone is seated on a fully decorated horse, holding a sword in one hand and controlling the horse in other hand and marching towards the enemy who is on the left side of the stone. The enemy is seated on a decorated elephant with an umbrella held over his head, indicating that he is king or an important royal dignitary. Behind this person is the depiction of ‘Rana Bhairavi’ (Victory Goddess) , who is standing nude, holding a skull in left the hand and Dhamaru ( drum) in the right hand. Opposite to Rana Bhairavi, there is a line up of musicians behind the hero warrior.  Also there is a depiction of three horse riders, indicating that they too sacrificed their life in the war. The enemy is on the opposite side, seated on the elephant marching towards the hero warrior. The elephant has been stuck with arrows in its head and forehead.  On its path elephant is bouncing one of soldiers from its trunk. Behind the elephant a curious image is sculpted, wounded soldiers lying on the ground in agony. The two mysterious creatures Shakini and Dhakini (devils) have come to feast on the wounded and dead soldiers.

At the bottom or the lower portion is the representation of the battle ground, fox, crows, vultures and other animals scavenging for flesh from dead bodies.

The upper portion depicts, the hero, after sacrificing his life, is taken to heaven; there he is seated on a throne and ‘Apsaras’ ( heavenly girls) dancing in front of him.

This is a very rare hero stone. No other memorial stone is found in India which can parallel this with such detail pictorial description of the battle filed. The Hero stone inscription at Kolaramma temple and Nambihalli both in Kolar district are other two hero stones which also depict war field beautifully, but they are no match to the Begur Hero stone.

This inscription is presently housed at Government Museum, Bangalore

This is a unique stone inscription of Karnataka. This is very large inscription containing both text and descriptive sculpture, till very recently, only the text portion was visible, as it was laying in an agricultural field.  Recent efforts have been very fruitful in bring to light on the other side of the inscription which is full of sculptures.

This inscription dated 1057 A.D, eulogizes that Dekabbe is the daughter of Raviga, ruler of Nungunadu.  Dekabbe was married to Echa, who ruled over the regions of Navilenadu. Once Echa had disputes with his close blood relatives. The then Chola King called him to Talakad, which was formerly the capital of Gangas and killed him. On hearing this sad news of her husband’s death , Dekabbe, decides to enter the funeral pyre along with her husband’s body and perform Mahasati.  The inscriptions describes the pleading of Dekkabe’s parents and relatives asking her not get into the pyre. However Dekkabe was very firm on her stand and commits Sati. She donates all her ornaments, gold, land, cattle, clothes and wealth to Brahmins. In her memory, her father Raviga erects this stone.

The lower portion shows Dekkabe seated on a palanquin in a procession.

The second panel, gives details of Dekkabe’s donations to Brahmins, priests and women and she getting into the pyre.

In the third portion, Dekkabe is being carried to the heaven by Apsaras (angles)  surrounded by musicians beating drums and playing flute to welcome her into the haven.

In the fourth portion, Dekkabe is welcomed by the women in heaven with poornakumbha (earthen pots filled with water).

In the fourth and fifth portion Dekkabe is standing in front of the Trimurthys (trinity- Brahma Vishnu& Maheshwara). Lord Siva is seen with his entire family and their vahanas.

Hence Dekabbe inscriptions is considered unique for its composition and sculptures and is a combination of both masti stone and memorial stone.