The systematic study of Kannada inscriptions were started in early 1800 by Colonel MacKenzi, a British officer in erstwhile state of Mysore under the British rule. Then scholars like Walter, Fleet, Rice and many other foreigners continued the work. After Rice, R. Narasimhachar led the Department of Archaeology and continued the work in the same was as Rice. Them M.H. Krishna continued the tradition. He was the person who found Halmidi inscription believed to be earliest Kannada inscription. Next, R.S. Panchamukhi, Dr. M. Chindananda Murthy and in recent times several scholars like Dr. Devarakonda Reddy and others have extensively studied the Kannada inscriptions and published them. The dept of Archaeology and the universities, museums, Kannada Sahithya Parishat, Karnataka Itihasa Academy and many others have undertaken the study and publication of inscriptions. 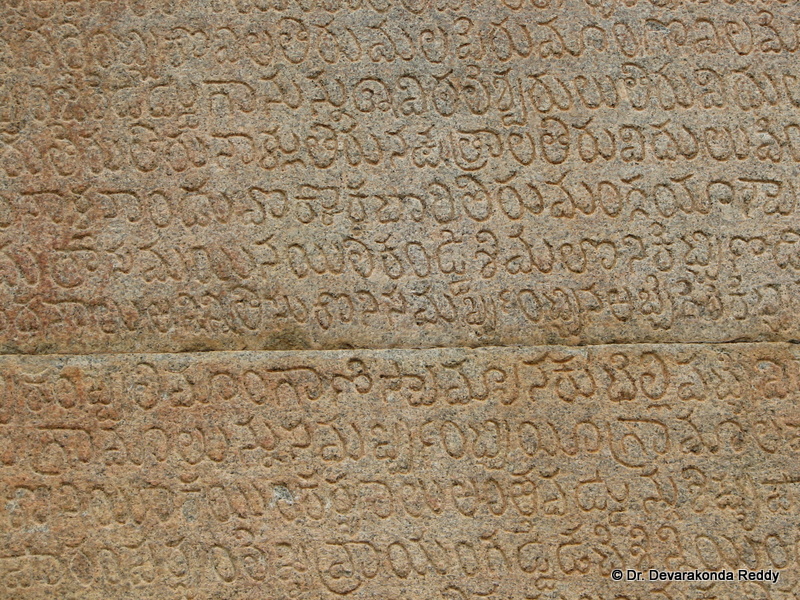 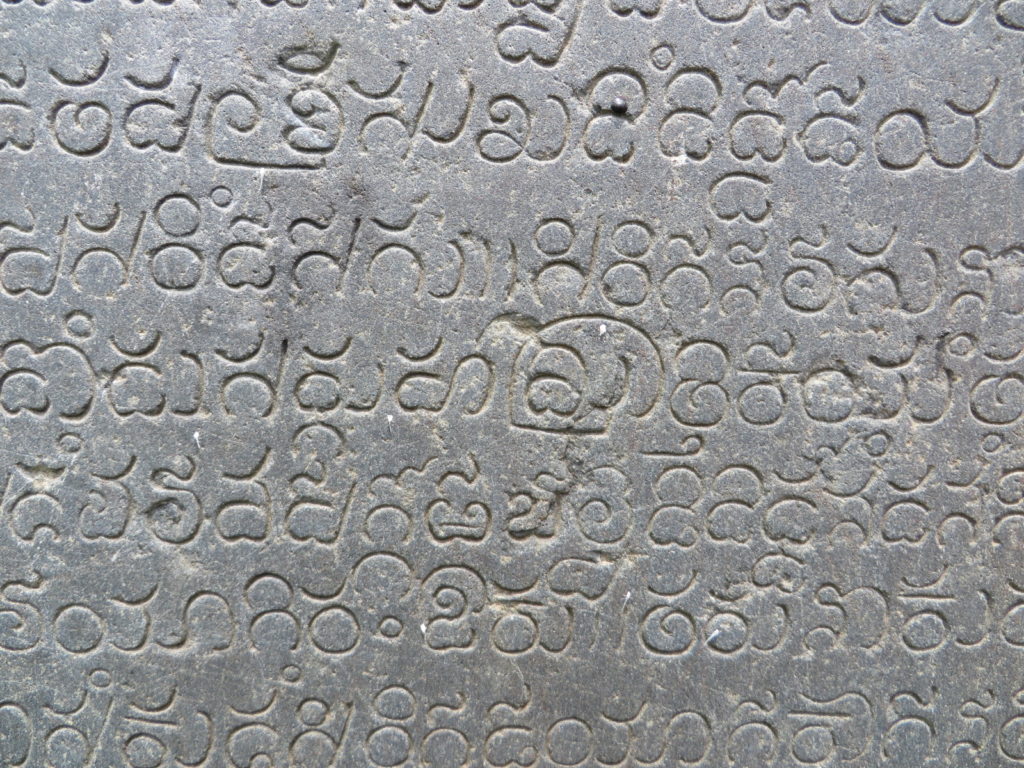 Inscriptions are glittering source materials which throw light on the history of a place. They are documents inscribed on permanent materials like metal, conch, stones or boulders. The root of the word ಶಾಸನ –  ‘Shasana’ is ‘Shas’, which means an order, a punishment, a control. The king usually publicized his order, he would keep a copy of his order written on copper plates, on palm leaves in his treasury with the intention of preserving it to the future administrators or rulers. The orders were also inscribed on stone slabs or boulders, a simple material available. The slabs were established in places of public activity.

Inscriptions written on stone are called ‘Shila Shasanas’ or stone records. To know the ancient culture and civilization of a region, stone inscriptions play a significant part. Because they are free from the process of tampering, they are contemporary records of an incident that happened. They cannot be displaced from their original place of establishment because of their weight and difficulty in carrying them. They throw light on the places of their find spot. The order in them were usually issued by the king or officials, sometimes by common men. Hence they depict the true history of the local population through the language used, characters inscized, and incidents described. They are the definite sources of history of a place.

The science of character in script writings is called Paleography. To read a record, knowledge of the script in which it is written will always help. Kannada has undergone many stages during its development through centuries.

Go to this page ‘Evolution of Kannada Script’ to know how Kannada alphabets evolved over a period of 1500 years and variations in the scripts used by different dynasties. 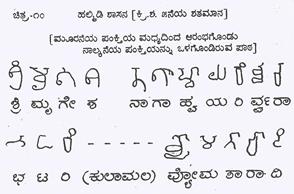 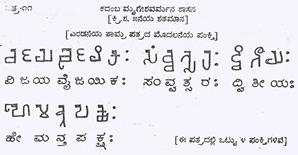 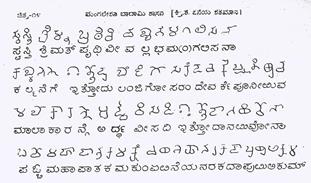 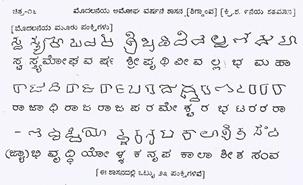 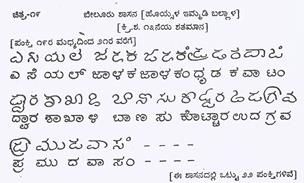 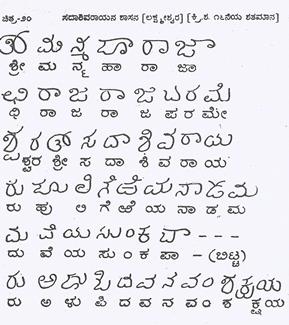 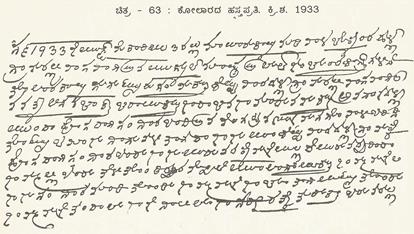 They eumanize the kings and officials and are usually written by the court poet.

These are found in large numbers; they are the official documents or charter conveying the grant or gift of lands by kings, officials or common man.

Best of inscriptions found in India are Hero Stones. They depict a heroic story and are with or without inscriptions. The varieties in them are stupendous. Hero stones are memorial stones erected in memory of heroes who died in a battle field while defending kings, or defending the cattle or women in distress.

Visit the page Hero Stones to know the meaning these types and to view beautiful pictures.

Study of copper plate grants is be undertaken carefully because of their spurious nature in some cases. Kuta Shasana is fake inscription prepared by greedy persons to grab others property. To know whether an inscription is a fake one or not, one has to study its script, language and the dynasty referred in it. The first scholar who brought out such inscriptions was J.F. Fleet.

Establishing an inscription is also an art. It includes, writing the script, carving it on stone, as well as some sculptures. At the first instance, the record is written by the official writer by the orders of the king or the official. The writer is usually referred to as Shasana kavi or the scriptor. Then a suitable stone slab would be selected and the surface is dressed to make it plain and even. Text of the inscription is written on the stone by using chalk or ink. The writer of the record or the one who is proficient in the art of writing would write the text on the stone slab. The stone mason called ruvari would carve the writings on the stone.

An in depth analysis of the text in inscriptions show a definite pattern in the narration. Almost all the records start with an auspicious note such as Om, Siddham, Swasthi, Shri. With this, there will be always the verse which praises the God of the respective faith of the donor. Shaiva records have the verse

“Obeisance to Sambhu, beauteous with the chamara like moon kissing his lofty head,

The original foundation pillar of the city of three worlds”

“Victorious is the revealed boar form of Vishnu, stirring up the ocean,

holding the earth resting upon the tip of his lofty right tusk….”

After the invocation to the gods, the record always refers to the contemporary king and his family. And then the record would give the details of the grant given and the receiver of the grant, with mention of the auspicious day on which the grant was executed.

To protect inscriptions from violations and destruction, the writer of inscription follow a method. That is, they mention, at the end of the order, the curse they get if anybody violates the order. This is known as ಶಾಪಾಶಯ ‘Saapaashaya‘.

‘Poison is no Poison at all. A person who consume poison may die.

The grant given to the service of a god is more dangerous than the poison,

Because it kills not only the person who stole them, but also destroys his whole family.’

When people not cared for ‘simple curses’, inscription writers used ‘harsher curses’ to deter the violators. For example, we see statements such as

‘whom so ever destroys this inscription will go to dirty hell or is like drinking cow dung liquor or is a sin same as killing a calf feeding cow etc..’

Impricatory verses are followed by the name of the composer of the record and the inscriber. However this may not be the case in all records.

The top portion of Inscriptions 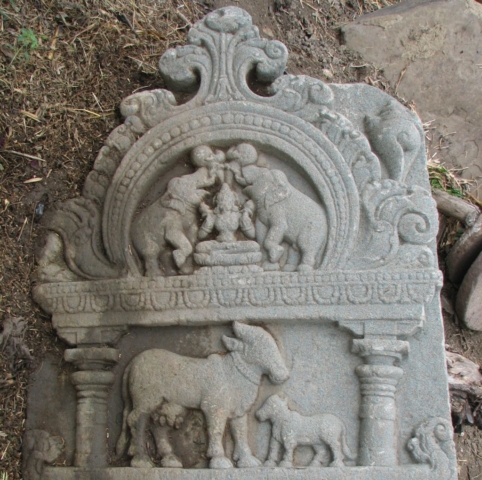 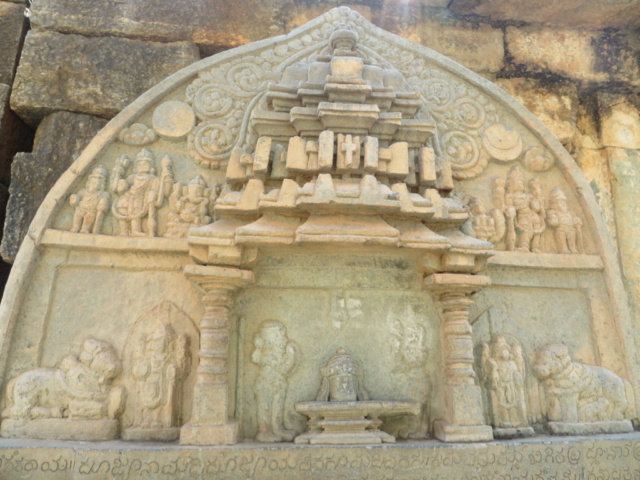 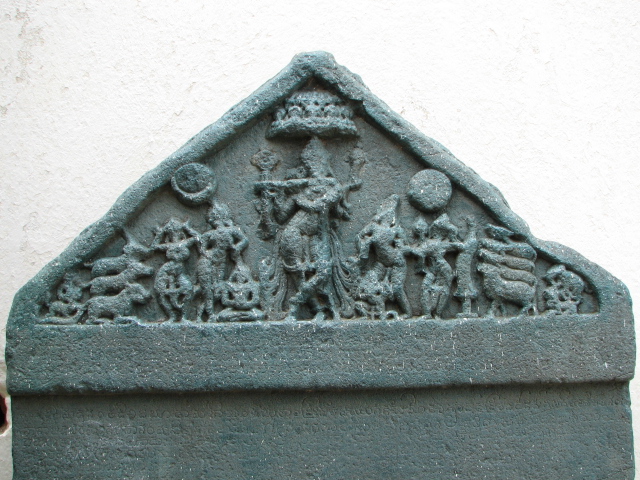 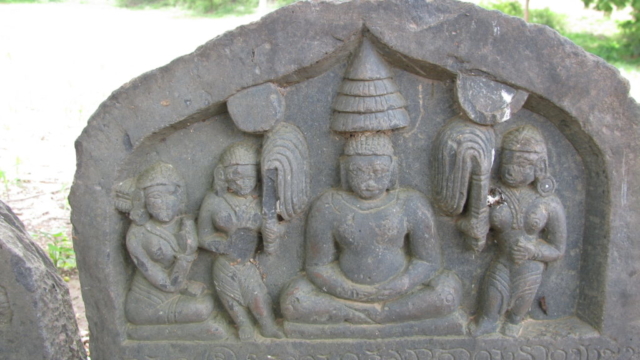 There are many significant carvings of architectural importance on some inscriptions. A donation record will usually have the god worshiped by the donor. The Shaivait record will have a Shiva linga sculpture with a bull in front of it or the sculpture of a Shaiva saint worshiping the linga. If it is Jaina record, the god would be Thirthankara sculpture. A Keshava sculpture flanked by Shanka, Chakra, if it is Vaishnava record. Almost all records usually have the Sun and the Moon carved at its top. It is believed that the donations as given in the record should exist as long as the existence of the Sun and the Moon. In rare cases, sculpture of a Brahman sitting in front of a desk called Vyasa peeta is seen. One of the carvings is a cow standing and feeding its calf and a sword shown by its size. They indicate that the theft of the grant is as sinful as killing a studious Brahman or a cow feeding its calf in presence of a deity.

pancha maha shabdha which denoted five big percussion instruments such as horn , tower , a conch a shell, a kettle drum and a gong.

Titles such as Uurodeya, Gaavunda, Gowda refer to the village chiefs

The lowest measure of length was chadura kolu or gane.

Coins which were in use are called Gadyana, pana, adda, haaga, bele, viisa and so on.

kurumbathere – tax to be paid by shepherds.

bitti – tax levied on workers, now the meaning has changed to work done without any wage.

Administrative units were called, mandala, nadu, uuru, sometimes with number suffixed to them. For example, Banavasi 12000, The number may suggest the number of villages in that region or the income of the region.